Do chiropractic adjustments boost the immune system by 200%?

Much like the mythical unicorn, the original Pero study on cancer patients could not be found

Origin: The claim that spinal adjustment/manipulation boosts immune function by 200-400% has been used by unorthodox (traditional) chiropractors to suggest that being adjusted by a chiropractor helps the immune system to fight off viral and microbial diseases often referencing a paper from Ronald Pero, Ph.D. (1940-2019). The Pero study has been referenced for decades as proof that chiropractic adjustments were beneficial to boost immunity in sick populations, including those with cancer and other serious health conditions. The original claim purports that individuals under chiropractic care had a 200% greater “immune competence %” compared to individuals with cancer or other serious diseases. Additionally, individuals who received long term chiropractic care were 400% more “immune-competent” to non-chiropractic participants. These statistics and claims stem from a purported publication from Ronald Pero, Ph.D., Chief of Cancer Prevention Research, NY Preventative Medicine Institute. Examples of memes in 2020 citing chiropractic and “immune boost by 200% can be seen here. Evaluation In this era where evidence-based health care is the gold standard, it is imperative that health care claims be verifiable, accurate, reliable, and valid. The goal of the ChiroSnopes was to track down the original Pero study (and other literature where it has been referenced) to determine if the claims of immune-boosting were based on science. To verify this claim, a formal search of the scientific and grey literature was conducted. 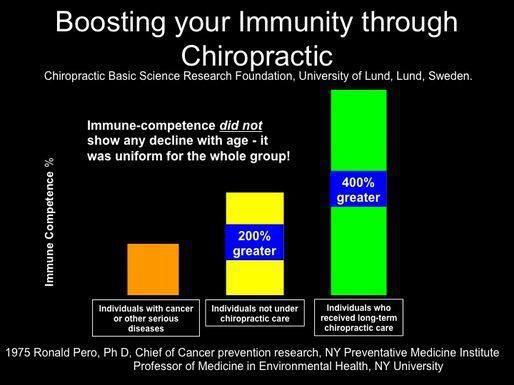 Specifically, in October 2019, the ChiroSnopes team searched the following databases in search of the purported original paper by Ronald Pero that claimed chiropractic care patients were 200-400% more immune-competent in individuals who had cancer and other serious diseases. The search included: 1. ICL (Index to Chiropractic Literature) 2. CINAHL (Cumulative Index of Nursing and Allied Health Literature) 3. AMED (Allied and Complementary Medicine Database) 4. Alt HealthWatch (through EBSCOhost) 5. PubMed 6. ResearchGate [for a list of Pero’s publications] 7. Lunds Universitet [for a list of Pero’s publications] 8. Internet Archive 9. Google 10. Google Scholar Verdict: Myth Busted The search was unable to retrieve the source document which claimed that the participants under chiropractic care were 200% to 400% to have more “immune competence” for patients with cancer and other serious health conditions compared to the non-chiropractic group. The search went as so far as to look directly at the University of Lunds, where the purported study was conducted and could not find a reference to the project. Despite this claim of improved immunity with chiropractic care persisting for over decades among the traditional faction, there is no scientific evidence to support it. The source document remains unpublished and unretrievable. Epilogue Although this project was conceived in 2019, in the context of the global viral COVID-19 pandemic, it is vital that practitioners, associations, and schools refrain from making claims of effectiveness or prevention that chiropractic adjustments/manipulation boosts the immune system in populations serious health disorders including those with viral and microbial infectious disease. References Cohn A. Chiropractic and the neuroimmune connection. J Vert Sublux Res. 2008 ;Sep(30):1-5. https://www.chiroindex.org/?search_page=articles&action=&articleId=20239 Campbell CJ, Kent C, Banne A, Amiri A, Pero RW. Surrogate Indication of DNA repair in serum after long term chiropractic intervention – a retrospective study. J Vert Sublux Res. 2005 ;FEB(18):5 p. https://www.chiroindex.org/?search_page=articles&action=&articleId=19433 Selano JL, Collins KF, Grostic JD. The effects of specific upper cervical adjustments on the CD4 counts of HIV positive patients. CRJ. 1994 ;3(1):32-39. https://www.chiroindex.org/?search_page=articles&action=&articleId=5619 Pero RW. Medical researcher excited by CBSRF project results. The Chiropractic Journal. August 1989. https://web.archive.org/web/20030126032532/http:/www.worldchiropracticalliance.org/tcj/1989/aug/aug1989f.htm #science #chiropractor #chiropractic #research #education #evidence based #patient centered #interprofessional #collaborative #rehabilitation #public health #spinal health #neuromusculoskeletal #musculoskeletal health #ethics #pain #function #disability #QOL #knowledgetranslation
Bookmark

Please donate and support our non-profit project, the EBC Practice-Based Research Network. The mission of the EBC-PBRN is to develop an international network in the chiropractic profession to facilitate collaboration and relevant research output to improve public health.